Mary Margaret Dickerson 92, of North Canton, passed away on Saturday, August 12, 2017. She was born in Canaan Twp., OH on February 13, 1925 to the late, William and Gail (Hawk) Mueller. Mary was raised by her aunt and uncle, the late, Warren and Margaret (Hawk) Baker, was a graduate of Rittman High School and went on to earn her bachelor’s degree from Wooster College. She was a teacher in Hardin County, Ohio, a homemaker while raising her family and retired from Revco Drug in 1990, following 13 years of employment. Mary was a member of Unity Church of Truth in Massillon and enjoyed gardening, reading and nature. She corresponded with her friends and family throughout her life and doted on her grandchildren and great grandchildren.

In addition to her parents, she was preceded in death by her husband, Paul E. Dickerson, who passed away on August 5, 2010; her grandson, Edward D. Waggy; two sisters and two brothers.

A memorial service will be held on Thursday, August 17, 2017 at 11am at the Reed Funeral Home North Canton Chapel, 801 Pittsburg Ave. NW, with Michael Regimbal officiating. Visitation will be prior to the service from 10-11am on Thursday at the funeral home. Inurnment will follow at the Ohio Western Reserve National Cemetery in Rittman, OH. In lieu of flowers, memorial donations may be made, in her name, to The Friends of the North Canton Library, 185 N. Main St. North Canton, OH 44720.

*Member of Unity of Massillon 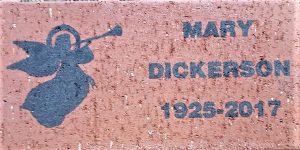 We can’t miss those sparkling blue eyes and the soft-spoken energy overflowing with ideas.  If we could visualize a state of grace, it would look very much like Mary Dickerson.

She and Paul have been married for 51 years and knew each other since the second grade.

Mary grew up in Rittman, Ohio, graduated from Wooster College and taught high school English and Biology before pausing to raise her family of 5 – two girls and three boys.  There are now ten grandchildren to enjoy.

Paul was a pharmacist for 30 years at Aultman Hospital Pharmacy.

Mary’s introduction to Unity came about through Frieda Bennett’s daughter, Cathy, who was in her girl scout troop.

In 1974 Mary heard Rev. June Dorrell in Canton and became a member of Unity at the Stark County Historical Building.

Involvement was immediate.  Mary participated in the class: “Discover the Power Within You, “often arranged Fellowship Sunday for five years; and planned a monthly dinner discussion group, which she thinks might be a good idea to reactivate.  Earlier this year Mary with Marie Kramer presented The Gallery Fair.  She has motivated a committee to seek the Unity Radio Grant and the application will go forth this year.

Mary says she is grateful for Unity beliefs and feels they have opened many new possibilities for her.  We can be grateful, too, for Mary’s energy and ideas directed to Massillon Unity.  Her firm belief is that our church should work on attracting community involvement.

Mary now faces the challenge of Maniere’s disease – an imbalance of the ear mechanism causing inner noises that interfere with her hearing.  There is no doubt that this challenge will be met successfully.