Louise Whitney Dykes age 98, of Columbus, Ohio, passed on March 6, 2018, following a brief illness at Friendship Village Health Center. Louise was born in Grenville, New Mexico, to the late Curt and Winifred (Nash) Whitney. She was raised in Oklahoma and attended Oklahoma State University where she joined Pi Beta Phi sorority. Louise married Eugene William Dykes on Jan. 25, 1941 in Oklahoma City. Bill and Louise moved to Canton, Ohio following World War II where Bill developed a successful architectural practice. Louise raised her four children and volunteered her time at the Canton Aultman Hospital and served on the Women’s Board. Louise had also been an active member of the Canton Junior League, College Club of Canton, Fine Arts Association, and PEO. Louise was a member of the International Graphoanalysis Society for many years.

Besides her parents, Louise was preceded in death by her brothers, Curt and James, and by one grandchild, Eric Jones. Survivors include her sister, Carolyn, her children, Laurence Allen of Indian Lake, Pa., Gene Whitney (and daughter-in-law, Olivia Mitchell) of Bala Cynwyd, Pa., Robert Gregory (and daughter-in-law, Virginia Dykes) of Fernandina Beach, Fla., and Barbara D. Jones of Columbus, Ohio; ten grandchildren, and four great-grandchildren.

A family Memorial Service was held March 9, 2018. There was no burial as it was the wish of Louise to be cremated. In lieu of flowers, memorial contributions may be made in her name to Unity Church of Truth, 4016 Wales Ave. NW, Massillon, OH 44646.

*Member of Unity of Massillon 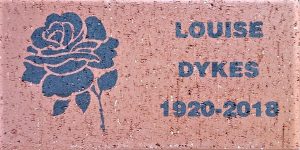 Louise and Bill were the parents I did not have during our married years.  Louise was there when a mother’s assistance was needed.  Always a special lady with gentle guidance and caring advice.  Louise was a model for us all.

Bill Dykes knew this all too well.  There were many family dining table gatherings.  Although the desserts served were varied and plentiful, a speech from Bill was always a constant.  Bill loved to tell his “thunderbolt” story of his lovely Louise.

It was at a fraternity party when standing next to my best friend, Kent Prim, Bill saw across the room a most beautiful lady.  To this Bill exclaimed to Kent, “I’m going to marry that girl!”  And so he crossed that room and met Louise to carry her into their future and thereafter.

My thoughts are with them both on this day, and with the beautiful and loving family who remain.