Joan grew up in Canton, Ohio where she graduated from Central Catholic High School and later attended Kent State University. In her youth, she learned to express herself through art. As an adult, she continued creating pieces which are dearly treasured by her family.

Joan loved spending time with her husband, Richard, and 3 daughters, Sarah, Carol and Rachel.  As a family, they spent their summers camping and in the fall, they hiked the Summit County Metro Parks.  She sewed clothes for people and Barbie dolls and even created a cross-stich picture of her daughters.  Her heart for helping others showed as she volunteered at her children’s school and helped an elderly neighbor by cleaning her house. She also had a lively sense of humor and enjoyed joking around and having fun.

Over the course of her lifetime, she demonstrated her intelligence and desire for personal excellence.  In elementary school she was a spelling bee champion.  In high school biology class she earned the nickname “Doctor Surgeon” by helping her classmates dissect animals.  During her adult years, she frequently read books on a variety of personal growth topics, always striving to be her best for others.  In the last few years of her life, she discovered that work in Occupational Therapy would provide an opportunity for her to use her training in art and her enjoyment of biology to help people to regain the ability to do things for themselves.  So, she went back to school to study Occupational Therapy at Stark Tech College.  She passed away before finishing her degree, but not before leaving an indelible mark of love and care in the hearts of all those who knew her. 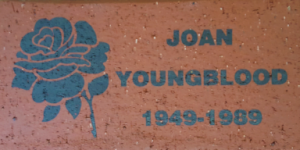 *Wife of Richard Youngblood and mother of Rachel Trembly