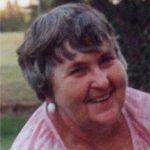 Dagmar was born Jan. 9, 1928 in Cleveland to the late George and Marie Kunz and moved to Massillon in 1971. She and her late husband, William owned and operated the former Massillon Inn for 23 years. Dagmar spent four years from 1956-1960 with the Special Services in Germany in the US Army. She authored a romance and adventure novel ‘Once in Berlin’ based loosely on her years in Germany. Writing was a deep love of her life and she wrote many articles for the Independent and the Senior Forum. Dagmar was a 1950 graduate of Fenn College (Cleveland State) and her work career included public relations for the Society for Crippled Children, General Tire Company and a Salfield Publishing Company. In addition to her parents she was preceded in death by her husband, William Telew (2003) and an infant daughter, Amy Telew.

A Celebration of Dagmar Telew’s life will be 10 a.m. Thursday at the Paquelet Funeral Home in Massillon. Her final resting place will be Rose Hill Memorial Gardens. Friends may call 6-8 p.m. Wednesday at the funeral home. She loved books and would appreciate contributions to the Massillon Public Library Book Fund.

*Member of Unity Church of Truth