We see him every Sunday, capably managing his group of ushers.  He’s a great hugger, too.

Bill Dykes and his lovely wife, Louise, are very familiar figures at our Unity Church.  They came to Unity in 1955 when Fred Beale – the only male minister in our local Unity history – led a group on Market Street in Canton.

Bill was attracted to Unity principles because they appeared more open than other religions he had encountered.  “Unity was not afraid to talk about what happens after the physical plane is completed.”

Bill entered the Army during World War II as an Infantryman and emerged an Engineer, remaining stationed in Okinawa two months following the war’s end.  At Oklahoma State University he received his architectural degree, and began designing schools.  The Dykes are both Oklahoma natives and came to Ohio by way of a business project.  His partner was Dick Lawrence, father of Jill Lawrence, respected and well-known metaphysical writer.  The families remain close friends.  Bill’s architectural firm’s outstanding achievement was designing Canton’s Cultural Center for the Arts.  The strong interest in free market economics led this man for all seasons to five years of teaching economics at Malone College.

Bill studied and authored many articles on survival of the personality after death.  Since 1961 he has been a Board Member of Spiritual Frontiers, an organization that works to bring the reality of life after death into church recognition.

Four Dykes children have given their parents 10 grandchildren to spoil.

We are so proud to have this talented and accomplished man and his wife on our Unity team. 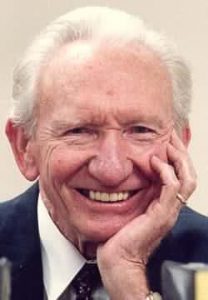 Eugene William “Bill” Dykes, age 85 of Canton passed on Thursday afternoon, September 12, 2002, following an extended illness at Canton Regency Health Care Center. Born in Oklahoma City, Oklahoma to the late Laurence and Hilma (Thurston) Dykes, he was a member of Unity Church of Truth, he attended Oklahoma State University, obtaining a bachelor’s degree in Architecture in 1940 and was president of both Sigma Alpha Epsilon and Interfraternity Council, Bill was also a Blue Key in Sigma Tau. A veteran of W.W. II, he was stationed in Okinawa, Japan from 1945 – 1947 and served under the Army Corps of Engineers as a First Lieutenant. Bill was registered by the state of Ohio as an Architect in 1943 and later obtained his NCARB (national) registration in 1964. In 1947 he co-founded, and in 1983 retired from Lawrence, Dykes, Goodenberger, Vandergrift and Clancy Architects. Past chairman of Mayor Cmich’s Committee on Human Relations, his local board memberships include, Canton Art Institute, Arts Unlimited, Brookside Country Club (President 1960), Canton Urban League and Pathway House Program. He served on the national boards of Foundation for Economic Education, where he held the chairman position from 1961-1964, Institute for Humane Studies, Spiritual Frontiers Fellowship, and the Curran Foundation. A contributing author of essays and articles, he was published on subjects such as architecture, individual liberty, economics and paranormal. Bill taught at Malone College from 1981-1986 in economics and free enterprise. He also helped guide the college to a national championship in free enterprise competition, winning the foundation award for classroom teaching. He was the first holder of the chair in free enterprise sponsored by the Canton Chamber of Commerce.
Besides his parents he is preceded in death by one grandson, Eric Jones.
Survivors include his loving wife Louise (Whitney) Dykes, whom he married on January 25, 1941. Three sons and daughters-in-law, Laurence Allen and Judith Dykes of Jackson Township, OH, Gene Whitney and Olivia Mitchell-Dykes of Philadelphia, PA, Robert Gregory and Virginia Dykes of Columbus, OH; one daughter, Barbara Louise Jones of Middle Town, OH, and ten Grandchildren.
Memorial service will be held on Monday at 11 a.m. in the Reed Funeral Home with Rev. Patricia Lee officiating. Calling hours will be one hour prior to the service from 10-11 a.m. There will be no burial as he wished are to cremated. In lieu of flowers, memorial contributions may be made in his name to an organization of your choice.