Elsie was born in the North Lawrence area where she grew up.  She was the youngest of 8 children.  She attended a one room school house and rode to school in a horse drawn wagon. She was proud to have graduated from Washington High School in Massillon.

She wanted to attend college but it was during the Great Depression and money wasn’t available.  She married Elmer Schroeder and they had two children, Mary Ann King a Unity member, and Timothy Schroeder of Virginia. Elsie worked for her husband in his businesses and later at the Apple Creek Developmental Center as a receptionist.

Elsie wished she could have gone to school to become a nurse since she had a passion for caring for others and helping those in need.  She cared for many people including her siblings, parents, husband, and friends.  Later she became a hospice volunteer.

Elsie lived in Canal Fulton and gave generous donations to that community. Her motto was: “What you do for others stays here on earth; what you do for yourself goes with you.”  She always said she wanted to die poor.  In 2008 she was named Citizen of the Year by the Canal Fulton Firefighters Association.

Elsie periodically attended Unity Church with her daughter and son-in-law until she found a church closer to her upbringing in a Reformed Mennonite Church. 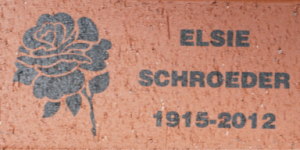